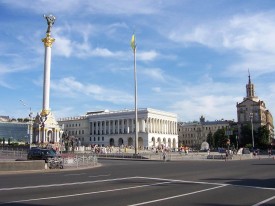 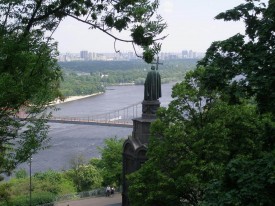 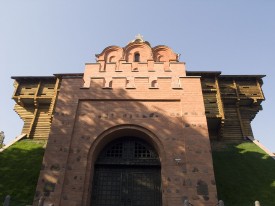 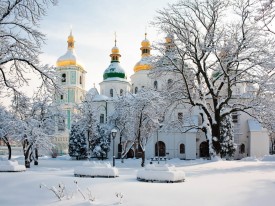 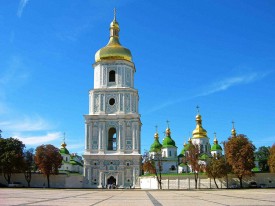 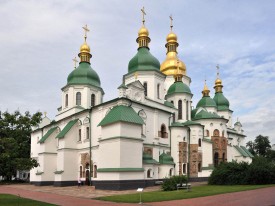 Due to its historical importance as the center of ancient and great state — Kievan Rus (IX-XII century), Kiev is called sometimes "the Mother of Russian cities". It is here the influential princes were sitting on the throne, there were built the first Christian churches, among which a special value still has St. Sophia Cathedral - the sanctuary and the brightest example of skilled craftsmanship.

Getting acquainted with the history of St. Sophia Cathedral, You will see the original frescoes and mosaics, the majestic figure of the praying Holy Virgin, so-called Maria Oranta, a true symbol of St. Sophia and old Kiev. In fact, St. Sophia Cathedral - an amazing piece of art, it is a miracle created by the skillful hands of ancient architects.

During this tour You will enjoy the main attractions of our city: the Golden Gate, St. Volodymyr's Cathedral, St. Michael's Cathedral, St. Andrew's Church which decorates St. Andrew's Descent. Podol - the historic shopping center, with a lot of winding streets, unique buildings and its fantastic, incomparable atmosphere. Also You will see Pechersk — elegant, refined, where it is impossible not to notice the House with Chimeras, Chocolate House,  the Administration of the President, Ukrainian Parliament and Cabinet of Ministers, the Ukrainian Drama Theatre named after I. Franko, stadium "Dynamo", etc. On the slopes of Pechersk is situated Kiev-Pechersk Lavra — the ancientest monastery complex of the XI th century, with its golden domes, pleasing to the eye. In addition, it offers stunning views, You can breathe freely and easily, contemplating a calm expanse of the Dnieper... Then - Maidan, noisy, fascinating, because it is the main square of ​​the country and Khreschatyk — the legendary main street of Kiev!

Kiev sightseeing tour will reveal the beauty and majesty of one of the most unusual and eternal cities of the world and inspire You to get to know it better. I am convinced that after this tour, everyone will have his/her own favorite place of Kiev, to where wants to return again and again...

I invite you to this exciting tour and I am sure of Kiev will not leave you indifferent!

There are minor changes in the route/equivalent to the replacement of some sightseeings due to unforeseen circumstances (such as traffic jams, complications of weather conditions and other force majeure situations). Please take comfortable shoes and appropriate clothes (especially visiting the religious objects). This tour is also available in foreign languages, either individual or group, the program and duration can be adjusted according to the wishes of tourists. Guide services without transport are also provided. Before ordering should ask about the final price.